Promotional Power Banks, What you need to know.

Custom power banks are everywhere – and for good reason. Smartphones, tablets, and other tech devices have become so important in our lives that people would rather have their tech gadgets than sex, alcohol, or caffeine.

Yes, it appears that technology trumps even the most primal of human activities and indulgences.

But what happens when these beloved tech items run out of power? Does everybody’s head explode?

No. Although it feels that way if your phone powers off and there’s not an outlet in sight. People either have to find a plug and recharge their device, or, if they’re smart, they have a power bank, an external battery pack that charges anywhere, anytime.

If you really want to win over your customers, custom power banks are the way to go. They’re fully customizable, they work with all kinds of phones, tablets, and other devices, and, most importantly when it comes to promotional gifts, they’re incredibly useful. Everybody needs power.

You should always give your customers something they can actually use – not something they’ll stuff into a drawer or closet to be forgotten. When your gift gets used, your logo gets seen. You know what that means – your company gets repeat exposure and stays at the forefront of customers’ minds. 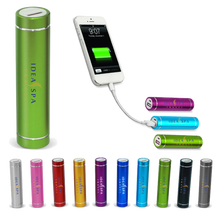 Want to learn more about one of the most popular promotional technology gifts on the market? Read on to get answers to some of the biggest questions about power banks.

How do power banks work?

A portable power bank is an external battery in a sealed case with a specially designed circuit to control power flow. It has a USB cable which allows users to charge via a power source like a laptop. This electrical energy is then stored in the power bank for use when a phone or other tech device is running low on power.

Power banks are convenient to transport, too – they’re small enough to tuck into a pocket, purse, or backpack.

mAh stands for milli-ampere hour. It’s a measurement of how much energy a battery can store. The higher the mAh, the longer the power bank will be able to charge a device.

Do power banks work with all phones?

Yes. Since power banks don’t have software, you don’t need to worry about platform compatibility. They’ll work with iPhones or Androids. And they’re not just for use exclusively with phones. If a tech device can be charged by a USB – think tablets, GPS systems, GoPros, portable speakers, and other items – it’ll work with a power bank.

How long does it take a power bank to charge a device?

Most power banks charge phones and other tech items at the same rate as a wall charger. So instead of being tethered to a wall outlet, users can resume their day while their phone charges.

How can I use power banks in my marketing efforts?

Custom-printed power banks are perfect for giving out at tech events, conferences, tradeshows, and more. Or, combine them with other tech items for a combo gift.

Power banks solve one of the biggest issues of modern-day living: the need for power for all of our various tech gadgets. Whether your customers are getting on a plane, working outdoors, or heading to the beach, they’ll never have to sweat it when they get that dreaded 10{5e058b9ed398c5deae3554a42fde2acfc7dcc892ad75f454e04c4ea411e1a529} battery warning on their phones.

They just slide the convenient power bank (that they got from your business) into their pocket or purse, and they’re all set with a dependable source of back-up power. And since the power bank is customized with your logo, your brand gets a boost each time it’s used. 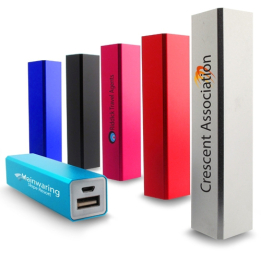 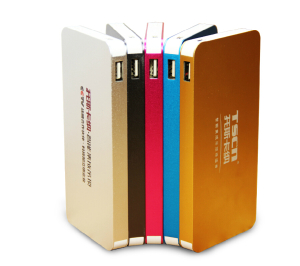